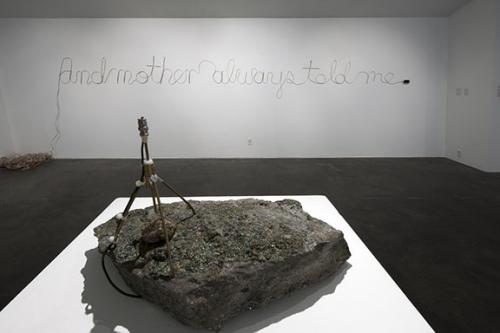 In honor of community radio station KCSB’s 50th anniversary, CAF presents Wireless, an exhibition featuring an international roster of artists exploring themes of radio transmission and communications. KCSB is a leader in non-commercial FM radio and the resurgent free-form format in the U.S. KCSB 91.9 FM is run by the Associated Students of the University of California, Santa Barbara. Wireless at CAF showcases artists residing in New York, Berlin, London, and Santa Barbara whose work is similarly concerned with the conveyance of ideas, memories, and objects across distances long and short. Former KCSB DJ and CAF Assistant Curator, NY-based curator Elizabeth Lovero brings together diverse mediums, such as sculptural installations, painting, video, photography, and sound. Wireless addresses pertinent issues in the radio community by showing works that champion individuality, mirror the spirit of decentralization and diversity in ownership and programming, explore community and low-power radio stations, and challenge the corporate broadcasting formulas.

In addition, Jim Toth’s new sculptural speaker installation will carry a KCSB stream as well as a curated program of transmission artworks by the Wireless artists and the UCSB Multicultural Center will screen Magic Radio, a film about the democratic power of radio in Niger, on November 16, 6 pm at the MCC Theatre. Admission to exhibition and the above listed associated events is free.

Elizabeth Lovero is a curator and writer, who is currently pursuing an MA in Art History at Hunter College, New York, NY.

Your ticket for the: Wireless