Selected from submissions from across Ventura, Santa Barbara, and SLO counties, the 2022 Call For Entries prompted artists to submit their artistic concepts online alongside a proposal for a mural that expresses what Earth Day and Climate Leadership mean to them. Maria Arroyo's concept was selected to appear on the Paseo Nuevo Arts Terrace Parking Deck adjacent to MCASB. The final painted mural was revealed on Paseo Nuevo's Instagram Live on Saturday, April 23, 2022, during Community Environmental Council’s Earth Day Celebration at the Arlington Theater. 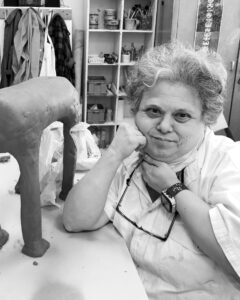 Featured on Arroyo’s mural, entitled Nature Dream Windows, is a ‘warrior bird’ inspired by the Mexica Warriors. To Arroyo, this figure represents the great caretaker, the one who looks after all the plants and animals of the earth. All come to him because of his power and benevolence. He keeps equanimity, balance, and harmony. The artist has portrayed this great figure atop a hill with magnificent wings and an elaborate headdress. Cloaked in feathers and accompanied by a devoted bird, he seems to suggest the symbol of ‘one who sees all.’ The ‘warrior bird’ looks over flora and fauna native to the Central Coast, in addition to inhabitants of the area, standing atop an opposing hill. 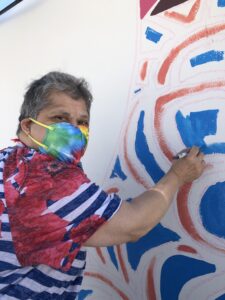 Maria’s Latinx heritage gives her work a sense of magical realism. Her eccentric landscapes and iconic figures, often encompassed in ornate patterns, pull the viewer into a mythic world – suspended from the everyday without fully leaving it behind.  Arroyo’s ability to envision and render new realities, to build new worlds is so very pertinent to current society as we are called upon to re-imagine and redefine our relationship to the land, all of its inhabitants, and our resources. Voices like Maria’s have long been muted and left out of these broader conversations that affect us all. We must now consider how our myopic discourse has led us astray and what can be learned from other voices.

Other Submissions to the Earth Day Mural 2022 Open Call

Casson Demmon’s paintings have been exhibited in museums, galleries, and alternative spaces on the east and west coast of the United States including The New York Metropolitan Museum of Art, The Williamsburg Art and Historical Society in Brooklyn, The Rubelle and Norman Schafler Gallery, The Puck Building Pratt MFA Gallery in Manhattan, Jack the Pelican Presents in Williamsburg Brooklyn, as well as Reynolds Gallery and Gallery Ocho in Santa Barbara, California. In addition, his work is in several private collections in California and New York City. Casson Demmon was born in Hollywood, California, in 1970. He received an MFA in fine art painting in 2002 from Pratt Institute in Brooklyn, New York. 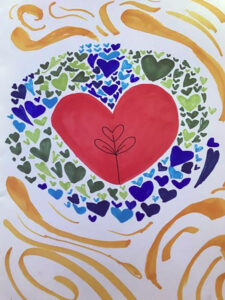 The earth grows from love within everyone.

My goal as an artist is to portray the beautiful moments when humans and nature complement each other in perfect harmony. I often look for unique ways to show humans and wildlife combining, provoking the viewers to consider going out into new and unexplored territory. I like to use a representational graphic illustration style. In my work, I often try to illuminate the beauty of bright colors that occur in nature.

About the Earth Day Mural Partners

Community Environmental Council (CEC)
Recognized as a 2020 California Nonprofit of the Year and a 2020 City of Santa Barbara Climate Hero, CEC has worked since 1970 to incubate and innovate real life environmental solutions that directly affect the California Central Coast. Our current work advances rapid and equitable solutions to the climate crisis – including ambitious zero carbon goals, drawdown of excess carbon, and protection against the impacts of climate change. Our programs lead to clean vehicles, solar energy, resilient food systems and reduction of single-use plastic. Learn more about why CEC is one of only eight Santa Barbara County nonprofits to have the highest possible ratings on independent watchdogs Charity Navigator and Guidestar at CECSB.org/impact, and find CEC on the web at CECSB.org and on Facebook.com/CECSB, Instagram.com/CEC_SB, and Twitter.com/CECSB.

Museum of Contemporary Art Santa Barbara (MCASB)
MCASB seeks to enrich lives and inspire critical thinking through meaningful engagement with the art and ideas of our time. MCASB provides Santa Barbara and the Central Coast with exhibitions and programming that encourage discovery, cultivate new perspectives, and challenge the way we see and experience the world, ourselves, and each other.

Your ticket for: Earth Day Mural