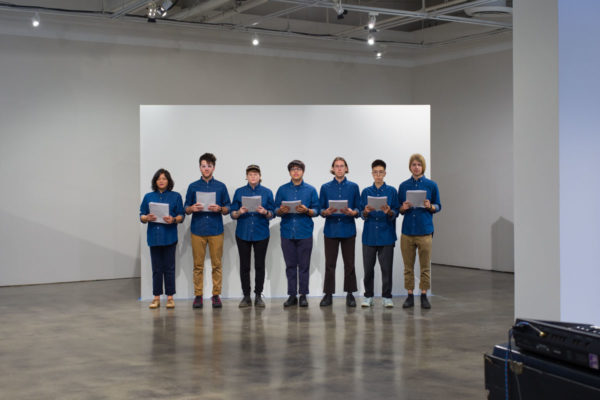 Join us at Museum of Contemporary Art Santa Barbara (MCASB) as we celebrate the opening of Kunsthalle for Music.

Museum of Contemporary Art Santa Barbara (MCASB) is pleased to announce the United States institutional debut of Berlin-based artist Ari Benjamin Meyers. Kunsthalle for Music, co-founded with the Witte de With Center of Contemporary Art, Rotterdam and Spring Workshop, Hong Kong, is an itinerant institution dedicated to the presentation of music within the histories and environments of the visual arts. For Kunsthalle for Music, an especially selected ensemble performs an on-site exhibition of musical works, which are drawn from a repertoire or “collection” that includes existing and newly commissioned solos, duets, and group pieces composed by Meyers as well as other artists. Ari Benjamin Meyers: Kunsthalle for Music at MCASB will transform the museum into a contemporary space for live performance of musical work, eluding the barriers between performers and audience.

Kunsthalle for Music was originally commissioned by Witte de With Center for Contemporary Art, Rotterdam, and developed in partnership with Spring Workshop, Hong Kong. Ari Benjamin Meyers is its founder and artistic director.

Kunsthalle for Music is curated by Abaseh Mirvali, Executive Director and Chief Curator.

Your ticket for: Opening Reception | Kunsthalle for Music