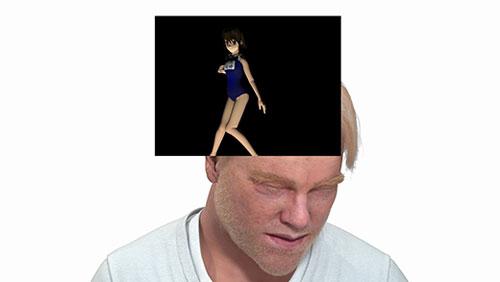 Digital technologies in the 21st century permeate nearly every aspect of contemporary life, impacting perception and experience. As computers increasingly co-opt the human body during an age of ultra-connectivity, the artists in this exhibition explore the precarious status of the self during its pixelated or roboticized evolution. In navigating the territory of online culture, where personal data, expressions, behavior, and emotions are stored and processed in often unseen or recondite behind-the-screen operations, their works question the ways in which identities are altered with immersion into the digital realm.

The exhibition title, Then they form us, refers to the influential writings of Canadian philosopher Marshall McLuhan. In the 1960s he wrote about various technologies (such as television) as extensions of ourselves that influence our position in and experience of the world. His prescient thinking resonates at a time when the mutation of computers into humans and vice versa is being radically innovated by the intelligence of machines and their users. In recognizing the tension between both the allure and threat of new technologies—from social media to affective computing—the artists in this exhibition address the morphing body by way of the body, using performance, video, painting, photography and sculpture to investigate its physical and cognitive adaptations.

Then they form us is curated by Brooke Kellaway, MCASB Associate Curator.

Register for Exhibition: Then They Form Us

Your ticket for: Then They Form Us