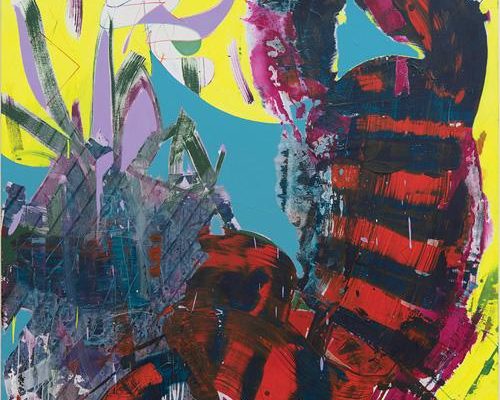 Since the early 1990s, Tam Van Tran has been producing an impressive body of work comprising abstract paintings, mixed-media collages, ceramic tiles, and sculpture. By mixing traditional art materials such as linen and acrylic with unconventionally applied organic substances (including spirulina, chlorophyll, wood, staples, and aluminum foil), Tran creates colorful and highly textural works that formally and thematically syncretize Eastern and Western influences. Tran’s intricate techniques extend the field of painting while incorporating imagery and materials laden with references to his native Vietnam, his adopted home of Los Angeles, spiritual concepts, and myriad other cultural references.

Tran’s solo exhibition at MCASB, titled Aikido Dream, which features a selection of approximately twenty works from the 2000s to the present, serves as a vehicle for understanding the nature of the artistic process rather than presenting a chronological or mid-career retrospective. Aikido, often translated as "the way of unifying (with) life energy" or "the way of harmonious spirit," represents a synthesis of physical and philosophical beliefs.  Aikido Dream also reflects Tran’s interest in meditation, our environment, and his belief in intuition and transience, realms in which nothing is fixed and everything is in motion. This exhibition offers a nuanced platform to understand his artistic trajectory, providing a framework that fosters an investigation of his long-standing, iterative interests in religious thought (particularly the Buddhist idea of non-duality) and pop culture, as well as natural processes and transitions. In this spirit of ethnic and processual diversity, even Tran’s titles are delightfully unexpected cultural fusions, evoking both indie song phrases and meditative koans.