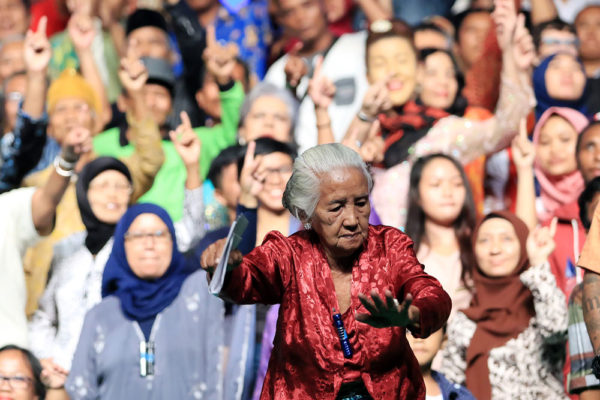 Rimini Protokoll: City as Stage is the first US museum exhibition of the Berlin-based artist collective Rimini Protokoll, formed in 2000 and composed of Helgard Kim Haug, Stefan Kaegi and Daniel Wetzel. Their work focuses on continuously developing the tools of theater to allow for unusual perspectives on our reality. Interested in bringing individuals from various backgrounds together to navigate overlooked or hidden aspects of the world, Rimini Protokoll’s projects, which sometimes take place in unconventional locations (such as hospitals, cargo trucks, or corporate meeting rooms), invite “real people” rather than professional actors, into semi-scripted situations to explore political and social issues of everyday life.

Opening just months after a contentious US presidential election, this exhibition investigates some of the dominant structures in our society today that influence how human populations are represented. At a time when polls, statistics, and various data-driven technologies increasingly separate us into numbers and categories, Rimini Protokoll’s works delve into the complexity and multidimensionality of human experience. They raise questions that include: How reliable are the sources of information that attempt to define who we are as a population? How do you measure culture? What factors make us feel a sense of belonging in our community?

100% City is an immersive video installation that extends from a series of the artists’ past performances held in 28 cities around the world. In these performances 100 citizens of each city are selected based on criteria that reflects the city’s demographics. On stage they express their views on diverse themes including aging, war, migration, and relationships. They share stories and secrets, expressing alternative demographies that cut across traditional geographic, cultural, and political divides.

Home Visit USA is a series of participatory performances that take place in private homes throughout Santa Barbara. Small groups of people gather around a table to play a game about the ever-changing ideas that define our country, focusing on issues that include identity, values, and borders. During the game, which follows the format of a political process, alliances begin to form, judgments are made, and things get competitive as teams vie for the biggest slice of cake. For more information and to purchase tickets, click here.

Home Visit USA marks MCASB's ongoing commitment to performance via our On Edge Performance Art Series and is funded in part by the National Endowment for the Arts.

For an insider view of Home Visit USA, check out this story from KCRW.

Your ticket for: Rimini Protokoll: City as Stage