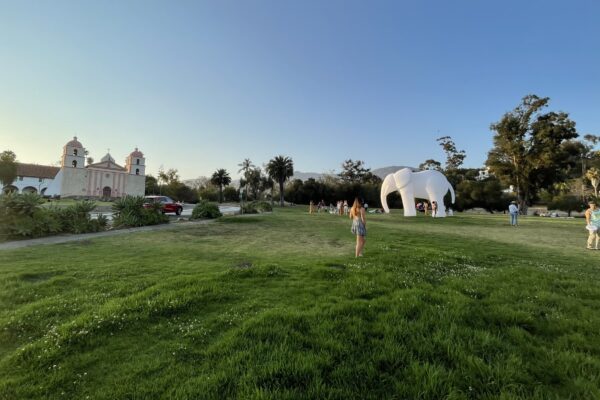 Museum of Contemporary Art Santa Barbara (MCASB) is pleased to present a culminating exhibition of the Light Elephant on view from September 23 - October 3, 2021. The Light Elephant is a “site reflective” inflatable public art program composed of a series of temporary installations within Downtown Santa Barbara in coordination with a sustained social media campaign.

Throughout the Summer of 2021, UCSB Professors and Artists Iman Djouini and Jonathan Taube directed a team of students to install this large-scale public artwork in dozens of sites in Downtown Santa Barbara. Through its installation and workshops, this project attempts to memorialize the stories of Downtown Santa Barbara art and culture from a decolonial perspective, as we start to turn the corner and re-engage with our public space.

Appearing in the background of familiar places and historic passages, moving through Downtown like a flaneur in public space, its presence provokes three simple questions that we can all reflect on whoever and wherever we are:

Working within the context of the pandemic, the artists focused on cultural sites impacted by this crisis, places of public services, quasi-public/private spaces, and other iconic sites that represent Santa Barbara’s “public image.” But does this “public image” represent the general public of Santa Barbara? The photography and video in this exhibition appropriates the “public image” of Santa Barbara shaped by the city’s private commercial interests, tourism, and real estate, in order to propagate important conversations with the general public, and welcome them to reflect, comment, and further contextualize the “elephant in the room.”

About the Artists
Iman Djouni and Jonathan Taube have partnered for the past decade to work in public spaces and on public issues. They have conducted research and produced artworks in public in Avignon, France, Rotterdam, Netherlands, Israel, along the US/Mexico border, Baltimore City, New Orleans, and Santa Barbara. Djouini earned her Master of Fine Arts in Printmaking from Tulane University and a Bachelor of Fine Arts in Painting and Art History from The Maryland Institute College of Art. Jonathan earned his Masters of Architecture at Tulane School of Architecture and a Bachelor of Fine Arts in Interdisciplinary Sculpture from the Maryland Institute College of Art.  Their creative practice is at the intersections of expanded print media, urban theory, and public processes. Iman is an assistant teaching professor for the College of Creative Studies and Department of Art at UCSB. Jonathan Taube is an architectural designer and has lectured at the Department of Art at UCSB. The Light Elephant has been exhibited in Baltimore, Maryland, and in Santa Barbara.

Your ticket for: Light Elephant