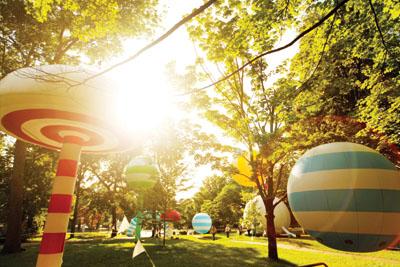 "The process of scientific discovery is, in effect, a continual flight from wonder." - Albert Einstein
"The pursuit of truth and beauty is a sphere of activity in which we are permitted to remain children all our lives."- Albert Einstein

Religious leaders, intellectuals, and scientists such as Honoré de Balzac, Buddha, Jesus Christ, Albert Einstein, Aldous Huxley, and Marcel Proust, espoused a practice of perceiving art and science through a child’s perspective—straightforward, devoid of pretense, and unflinching in its outlook—to invigorate the imagination. Their philosophy encourages us as adults to cast aside preconceived notions and approach the world from this unfettered child’s point of view, so that we may broaden our world view, and stimulate our minds, allowing for greater degrees of discovery, curiosity, compassion, and wonder.

Inspired by this perspective, Flights from Wonder transforms CAF into a series of engaging, hands-on, interactive installations that heighten the synergy between artists and audience, and challenge all ages to re-imagine their relationship to art. The exhibition explores alternate ways to experience art by posing questions such as: How do children react and relate to the art of our time? How do we experience contemporary art? What new awareness can we acquire from children? Featuring an internationally recognized group of artists including Christopher Chiappa, Liz Craft, Martha Friedman, FriendsWithYou, Jon Pylypchuk, Carolyn Salas, Mindy Shapero, Shinique Smith, and Phoebe Washburn, Flights from Wonder empowers audiences to think, play, and create, and rejects the myth that contemporary art is mystifying or elitist, demonstrating instead that art is an enriching and stimulating part of the human experience.

Register for Exhibition: Flights From Wonder

Your ticket for: Flights From Wonder