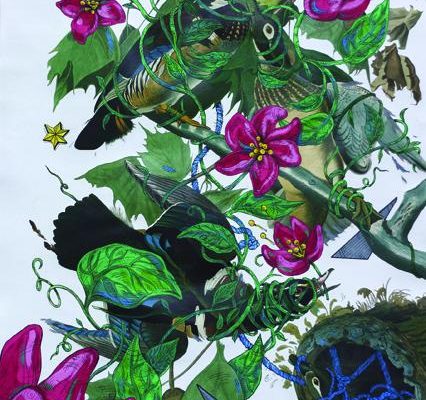 As early as the 1900’s, the city of Santa Barbara promoted itself and its environs as an idyllic setting. From Pearl Chase’s visions of utopia to the widespread dissemination of the resort destination via the eponymous soap opera and into today’s promotions by the Chamber of Commerce and Conference & Visitors’ Bureau, Santa Barbara has consciously sold and established itself as a modern-day paradise.

CAF dares 12 local artists to take a bite out of the proverbial apple with an exhibition exploring the realities and ambiguities of living in such an Edenic location. Via the artists’ works, this exhibition will reveal the multi-faceted issues of the region, both embracing and critiquing our history, sociology, and current conditions.

Eating Apples in Paradise is brought to you in collaboration with Lotusland’s exhibition, entitled Penelope Gottlieb, Gone, on view from February 26 - April 23, 2011. Docent-guided tours offered Wednesday through Saturday for an admission fee of $35 (adults), $10 (ages 5 to 18), and FREE to children under 5. Reservations are required to view the exhibition and may be made by email at reservation@lotusland.org or by phone at 805-969-9990.

Your ticket for: Eating Apples in Paradise