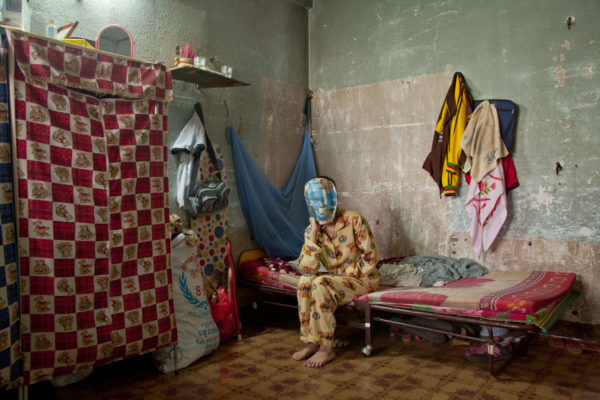 In collaboration with Sa Sa Bassac, a gallery and resource center based in Phnom Penh, Cambodia, MCASB presents a solo exhibition by Khvay Samnang (b. 1982, Svay Rieng, CM). The artist, whose work encompasses photography, video, sculpture, and installation, is interested in revealing how the complexities of Cambodia’s postwar national transformations—from urban development to agricultural practices—are registered and experienced. Khvay’s extensive research-based projects involve alternative interpretations of historical events and political subject-matter, in which contentious public issues are addressed through poetic and performative interventions. Khvay often uses his own body—incorporating symbolic gestures and ritual—to personalize the impact of colonial infrastructures on Cambodia’s communities and land, and what this means for future generations.

Footprints of Yantra Man (2015) refers to the country’s history of violent war—from the Cambodian soldiers who fought in and for France in World War I to those killed by United States bombings during the Vietnam War—and the Khmer Rouge regime’s cultural demolition that occurred during this latter period. The installation, while commemorating those involved in these traumas, focuses on the ways in which Southeast Asian sacred traditions, here in the form of drawings and objects, are continued forms of resistance against conflict, colonial oppression, and displacement. The text, images and patterns in Khvay’s work are inspired by yantra—a mystical manifestation (often design) that bring about protective powers. Khvay depicts personally resonant yantra in the engraved metal armor sized to the artist’s own body; the metal plate bindings of a long cotton string depicting a Hindu amulet; and the ink drawings on a wall-sized red cloth. Further, extending his focus on the yantra to Cambodian diaspora, the photographs in the installation are based on the artist’s interviews with Long Beach residents (the second largest Cambodian community outside of Southeast Asia) about their relationship to spiritually significant objects. Their stories are written on the backs of the photographs. As Khvay’s work traces the generational transmission of traditional Cambodian belief systems, the artist is also interested in how Footprints of Yantra Man asks us to consider the significance in broader migrations of sacred cultural symbols and rituals as they are altered, remade, and reinterpreted across geographies and time scales.

Khvay Samnang is a founding member of arts collective Stiev Selapak (Art Rebels), which formed in 2007 as a space for artists to share resources and exchange critical dialogue on contemporary art. The collective generated increased visibility on the various ways artists were making work that often dealt with the traumatic residue of the Khmer Rouge regime and the country’s subsequent rebuilding. Stiev Selapak’s work, including their founding in 2010 of the art space Sa Sa Bassac, together with curator Erin Gleeson, is seminal to the development of Cambodian contemporary art history.

Public programs scheduled in early November 2016 (please check back soon for more details). Khvay and Sa Sa Bassac’s artistic director, Erin Gleeson, will visit Santa Barbara for a series of discussions and workshops focused both on the artist’s project at MCASB and the role of Sa Sa Bassac in the cultural community of Phnom Penh and abroad.

This exhibition marks the beginning of a two-year exchange series that takes place in MCASB’s Bloom Project exhibition gallery, a space that for over a decade continues to feature new commissions and experimental projects by regional, national, and international emerging or under-recognized artists. The series presents solo exhibitions focused on programmatic collaborations with small-to mid-sized “off-centered” art organizations in cities across the globe. While bringing increased visibility to vibrant yet less broadly known artistic contexts, the exhibitions generate dialogue on innovative and localized approaches to display, communication, publishing, and audience development. A focal part of the series is public programming that involves critical discussion amongst Santa Barbara artists and arts professionals on articulating the necessity of new or expanded arts initiatives; and considering various factors that influence how these initiatives emerge and endure, notably in regions outside of major artistic centers, as is our town.