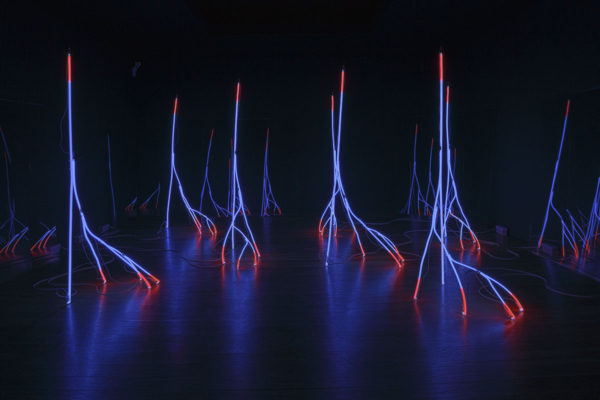 The first solo museum exhibition of Silvestre Pestana’s work in the U.S., Breathless features an intimate view into the vast universe of one of Portugal’s most pioneering artists. Pestana’s practice, which evolved out of a background in experimental poetry, has involved forays into the realms of sculpture, video, performance, photography, and gaming over the past fifty years. These works seek to explore how humans interact with and negotiate a variety of controlling forces in the world and how art can be a vehicle for challenging those very same forces, be they technological, economic, or political. Included in the exhibition are a selection of Pestana’s earlier pieces, as well as a newly commissioned performance, the date of which will be announced soon. As a whole, the exhibition touches on a number of pervasive issues facing society today, from the changing state of our environment to the impact of war, all of which have continuously informed Pestana’s work throughout the course of his illustrious career.

Silvestre Pestana (b. 1949, Funchal, Madeira) studied Graphic Arts and Design at the School of Fine Arts of Porto, PT and received a Master’s degree in Art Education and Design from the De Montfort University, Leicester, UK. Between 1969 and 1974 while living in Stockholm, SE as a political exile, his artistic practice developed through experimentations with various forms of poetry, performance, and music . In the late 70s, he directed the first video art films in Portugal, where he was one of the main producers of this art form. He was also the first artist to write poetry for Spectrum personal computers, in 1982-84. For the past several years Pestana has continued to incorporate new technologies into his practice, including drones and online virtual platforms.  His work was recently featured in a major retrospective at Serralves Museum of Contemporary Art, Porto, PT (2016); and also included in exhibitions including the Maia Biennial, Porto, PT (2015); Espaço Mira, Porto, PT (2014); Casa da Escrita, Coimbra, PT (2013); Centre of Modern Art, Calouste Gulbenkian Foundation, Lisbon, PT (2010); and Uma Certa Falta de Coerência, Porto, PT (2009). Pestana lives and works in Porto, PT.