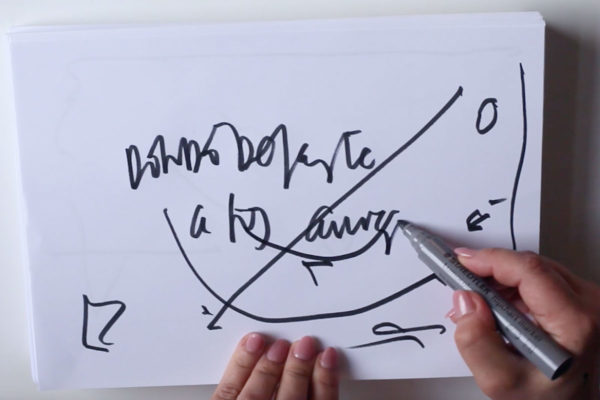 Migrating between surfaces, an avalanche!

Dust hovered with the weight of a patina, falling over and among things. It did not come from anywhere, or after anything—it was not a result. It was the dress of time, its permanent dust jacket, combining and recombining the ticking clock into layers, between development and maintenance.

Not-seeable and not-understandable if not in its behaviour, dust shares this property with other things. Together, they are cases or holders, that is devices to grapple with objects and names through. Among them there are yellow Post-It notes, cut-out heads, clips, keys, claps, synthetic voices, prop and light relatives; as well as quotation marks, hetero- and pseudo-nyms, bare nominees, impersonations, fictional personae, et al. They address papers and desks, corners, doors and rooms, contents and volumes, as well as normative discourses, processes of figuration and subjectivization. But they also appear to the visitors who wrote the press release what heads are within a head: legions of intimate objects in a world otherwise hostile, participating in the production of a sense that is familiar but not fully graspable, for the protection of the truth. Like a thick layer of fog, that partial translation of things into names allows such characters to circulate and inhabit a multiverse of identities.

The condition of those alter egos, doubles, and alibis is diagrammed by the multigraph. In mathematics, a multigraph is a graph which is permitted to have multiple edges or, in other words, edges with the same end nodes. If you want to see it, draw a square and clockwise name its nodes A, B, C, and D. Then add four (or more) edges to this figure by tracing a line between A and B, B and C, C and D, and D and A. The multiple edges or, the aforementioned shadow-images of the artist, are without own identity, for the identity of an edge is defined solely by the two nodes it connects.

In photography, it may be said that something similar happens. A photo-multigraph (or five-fold portrait) is a technique emerged around 1893 in Atlantic City (NJ) which involves the making of four copies of the sitter in just one photograph through a clever use of two intersected mirrors. The result consists of five folds of the same identity displaced by the master one, which remains unknown, blended among the others, a thing among things: like playing a card game whose winner is either one, no one or five.

A previous version of this technique may be found in portrait sculpture, whereby a multi-angled portrait painting served as the scan of the sitter to guarantee the truly three-dimensional likeness of its then marble bust. Take for example Charles I in Three Positions (c.1635), also known as the Triple Portrait of Charles I. It is an oil painting of Charles I of England by Sir Anthony van Dyck, showing the king from three viewpoints: left full profile, face on, and right three-quarter profile. The painting was sent to Rome in 1636 to be used as a reference work for Gian Lorenzo Bernini to create a marble bust of Charles I. Van Dyck had presumably been influenced by Lorenzo Lotto's The Triple Portrait of a Goldsmith (c.1530), which was in Charles I's collection at this time. The King's portrait in turn probably influenced Philippe de Champaigne, who in 1642 painted a Triple Portrait of Cardinal Richelieu to assist Bernini (or another sculptor) with a bust of the Cardinal.

Anyway, time is suspended and space becomes an interval there; the sitter is transformed into a series of spooky apparitions or into how others see it in all its “defects and crudities”. The sitter may also be seen trying to find itself through intensified self-knowledge in reflection and running away always faster.

Having called into life its likeness, the repetition of this “I” who sits in the shape of multiple signs is pitched like language booze: almost a language-inflected thing, it is generic and mysterious, uniform and parodic, a promise to cast doubts on that which is visible, to refuse the course of things allowed and required of those repeated signs, as well as to look for what meaning is dancing out of sync around them in a shaft of sunlight, or for what destroys that very same meaning. It holds onto a system where “~” reads the complementarity of “is/as”, so:

The I ~ a hieroglyph,

and writing a line ~ drawing.

Ordinary language has its own tricks and can do extraordinary things too, such as to adopt symbols and discard interpretations. Like an ancient divinity—opaque, or readable via patterns (not meaning) only—, it sometimes resurfaces in other versions which are things-inflected. In this way, it disrupts its supposed functionality, slows down the impulse of reading and looking for meaning; and, instead, it invites to look (not for), to follow that manic continuum of signs, promising nothing but the instability of the line which draws them.

Being tantamount to a collective fabulation (a mode of knowledge), such intimate labyrinth becomes a confabulation (a form of action) to escape burdensome social obligations and re-generate signs of existence, conjectural and de-totalised.

Comprised of seven chapters, Ask the Dust inhabits a space that shifts and expands as the artwork “grows” within it throughout the duration of the exhibition. At the Opening Reception on Saturday, November 10, 2018, the first three chapters were released, alongside a commissioned text by writer Bianca Stoppani.

Ask the Dust is the continuation of a series of film works that Olabarrieta has been working on over the past few years, including her durational performance Dumb Bells presented at the Serpentine Gallery in London in 2016.

Following the exhibition at MCASB, Ask the Dust will continue to unfold as chapters are added to the film work and take on new iterations.

This exhibition is part of MCASB’s Bloom Projects series and is programmed at MCASB’s Main Space location, in the Charles Bloom Foundation Gallery. Bloom Projects features newly commissioned artwork by regional, national, and international emerging or under-recognized artists. Bloom Projects gives contemporary artists whose work has begun to garner significant attention an opportunity to move beyond their studio practice, encouraging experimentation and giving them the resources necessary to further their careers as professional visual artists.

Your ticket for: Bloom Projects: Beatriz Olabarrieta, Ask the Dust