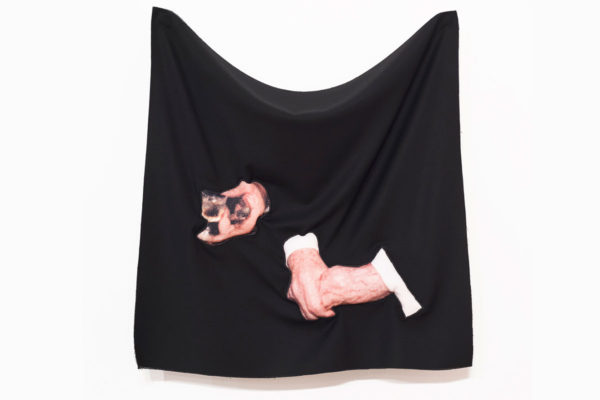 In collaboration with Art Practical, an online art publication based in San Francisco, CA, MCASB presents a solo exhibition by artist and writer, Bean Gilsdorf. For the past decade Gilsdorf has worked in a range of mediums to explore relationships between historical accounts, emblems of authority, and media representations that influence our perception of current events. At MCASB she expands on a recent series of work that focuses on a history of U.S. celebrity political figures, specifically those with a Hollywood past. The exhibition will feature a new commission of sculptural textile wall works that consider the making of political symbols and myth through the image of former President Ronald Reagan. Gilsdorf is interested in the ways in which the media and show business continue to infiltrate the realm of politics. She brings attention to the image-making industry’s transmission of certain symbols of power and fame. In Gilsdorf’s accumulation of source material she investigates the meanings behind certain motifs and idiosyncrasies—for example, in a hairdo, or a handshake—and highlights these visual details in her work, using varying textures and contortions. The artist’s deconstruction of popular images of our nation’s history—circulated on news and entertainment channels and in mass-market history books—offers a lens of criticality to how we mythologize presidential history, and, extensively, to the electoral events leading up to this exhibition.

Bean Gilsdorf and Art Practical’s founder, Patricia Maloney, will visit Santa Barbara for a series of discussions and workshops focused both on the artist’s project at MCASB and the role of Art Practical in the cultural community of San Francisco and abroad.

Gilsdorf’s work has been included in exhibitions at Wattis Institute for Contemporary Arts (San Francisco, CA); American Textile History Museum (Lowell, MA), and the Holter Museum of Art (Helena, MT), as well as exhibition spaces in Poland, England, Italy, China, and South Africa. She has been nominated for SECA Award (SFMOMA, San Francisco), and for the Anonymous Was A Woman Award (New York). Gilsdorf received her BA from Bard College at Simon's Rock, and her MFA from the California College of the Arts. She was a 2011-2012 Graduate Fellowship Resident at the Headlands Center for the Arts (San Francisco, CA), and has participated in residencies at Kala (Berkeley, CA), Cannonball (Miami, FL), and the Banff Centre (Banff, AB). In addition to her artistic practice, Gilsdorf is the Editor in Chief of Daily Serving, an international journal for the contemporary arts, and her critical writing has been included in publications such as Artforum, Art Practical, BOMB, and Frieze. Gilsdorf currently lives in Warsaw, where she is a 2016-2017 Fulbright Fellow in Creative Writing.