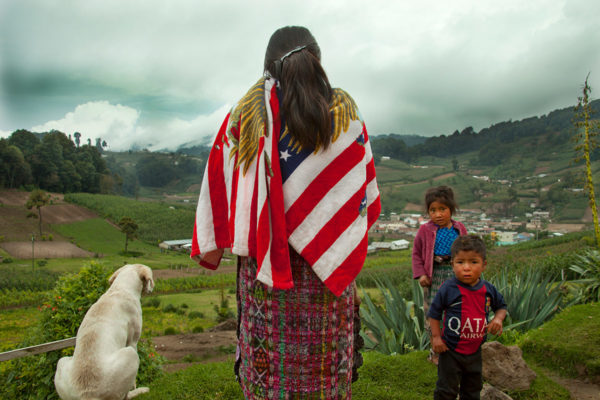 Museum of Contemporary Art Santa Barbara and Westmont Ridley-Tree Museum of Art are proud to present a symposium focusing on Guatemalan visual art production from the 1960s to the present day as the culmination of the exhibition Guatemala from 33,000 km: Contemporary Art, 1960 - Present. The symposium brings together renowned critics, academics, and Guatemalan art historians Rosina Cazali, Martín Fernández, Silvia Herrera Ubico, and Mario Roberto Morales, who also served as the Advisory Committee for the exhibition, in addition to co-curators Miki Garcia and Emiliano Valdés.

Part of the Getty’s ambitious Pacific Standard Time: LA/LA initiative, Guatemala from 33,000 km features works of art created in Guatemala just after the start of the civil war in 1960 to the present day. The exhibition is organized around nine central ideas: Art & Politics; Art Histories; Formal Experimentation; Gender Perspectives; Land, Landscape, Territory; Popular Cultures; Racisms & Identities; Religion/Spirituality/Metaphysics; and Violence & Trauma. The vast range of artwork in the exhibition, spanning diverse media and perspectives, demonstrates that even during the worst years of repression and war in their country, artists, both as individuals and collectives, continued to create visual expressions that not only mirrored but directly engaged with the sociopolitical situations of their time, albeit often through muted languages and conceptually oriented presentation.

This first major examination of Guatemalan modern and contemporary art, both in Guatemala and abroad, Guatemala from 33,000 km connects the country’s artistic output to practices and initiatives taking place in Latin America and to broader global art phenomena of this era.

Tickets may be purchased here through our professional event ticketing system.

The symposium is part of the Pacific Standard Time LA/LA Santa Barbara Weekend. Additional information on events and exhibitions can be found at sbma.net/pstsb.

Special thanks to our event volunteers from the Westmont Art Council.

Miki Garcia (US, 1972) has been Executive Director at MCASB since 2005, where she has curated exhibitions such as assume vivid astro focus: avalanches volcanoes asteroids floods (2016); Dasha Shishkin: erry icket (2013); Michele O'Marah: Video Portraits and Home Show, Revisited (2011); Sanford Biggers: Moon Medicine (2010); and Marc Swanson: Beginning to See the Light (2007) among several other group and solo projects with local, national, and international artists. Previously, Garcia worked at the Public Art Fund, New York, NY and at the Museum of Contemporary Art San Diego, CA. She has also participated as guest curator at El Museo del Barrio, New York, NY and as a lecturer and panelist for various organizations including Creative Capital, California Community Foundation, Art Matters Foundation, Lower Manhattan Cultural Council, and the City of New York Department of Cultural Affairs. Garcia holds a MA in Art History from the University of Texas at Austin, TX and a BA in Art History from Vassar College, Poughkeepsie, NY.

Emiliano Valdés (Guatemala, 1980) is Chief Curator at the Museum of Modern Art, Medellín, Colombia. Previously, he was Associate Curator for the 10th Gwangju Biennale which opened in September 2014. Before that, and for nearly five years, he was Curator/Head of Visual Arts at the Spanish Cultural Center in Guatemala where he developed a contemporary art program that helped re-shape the country’s art scene. Valdes also co-directed Proyectos Ultravioleta, an experimental platform for contemporary art in Guatemala City that engages in a re-thinking of its visual and cultural production. His 2011 project Serie Revisiones, which included semi-retrospective exhibitions of some of the most significant Guatemalan contemporary artists, serves as precedent for documenting the work of modern and contemporary artists.

Rosina Cazali (Guatemala, 1960) is an art critic and an independent curator, specializing in Guatemalan contemporary art. She is a founding member of La Curandería and Editorial Laica. She was the Director at the Spanish Cultural Center in Guatemala between 2003-2006. She has participated as curator for several international biennials and exhibitions in different places throughout Latin America and Spain. She was invited as a speaker to discuss performance art and video art in Guatemala at the event Performing Localities, organized by the Royal College of Art, London, 2009. In 2010 she received the invitation from Mondrian Foundation and Prince Claus Foundation to participate in the project called Orientation Trip, an exchange between art professionals in Istanbul, Mali and Nigeria. That same year, Cazali received the John Simon Guggenheim Grant to conduct research on contemporary art in Guatemala. She is an author of countless essays about contemporary art in Guatemala, and currently is a columnist and essayist for the cultural section of the Guatemalan newspaper El Periódico named El Acordeón and Nómada, a digital magazine. In 2014 she was honored with the Prince Claus Award for her trajectory as curator and writer. Recently she received the Jumex Fund for Researchers. Rosina Cazali holds a BA from the University of San Carlos of Guatemala.

Silvia Herrera Ubico (Guatemala, 1955) holds a PhD in Philosophy and Literature by the University of Navarra, Pamplona, ​​Spain, with a thesis in the artistic philosophy of Etienne Gilson. She obtained a Bachelor of Philosophy and Literature from Rafael Landívar University, Guatemala with a thesis on the history of theatre in Guatemala. She has worked at such institutions as the Ixchel Museum of Indigenous Dress, American Guatemalan Institute, and the Carlos Woods Gallery of Ancient and Contemporary Art. She teaches Guatemalan Art History at Francisco Marroquín University and has taught similar themes at San Carlos de Guatemala University, Universidad del Istmo and Universidad Rafael Landívar, Guatemala City. She has worked on several publications related to culture, philosophy, arts and aesthetics in collaboration with the magazine of the University of San Carlos, Guatemala Magazine, Culture of Rafael Landívar University, and Gimnasia Magazine, among others. She has written several articles for varied publications about Guatemalan artists, such as: Humberto Garavito, Francisco Cabrera, Delfina Luna de Herrera, and Carlos Valenti, among others.

Mario Roberto Morales (Guatemala, 1947) has published books on literary criticism including Ideology and Lyric of Armed Struggle (Guatemala: Editorial Universitaria, 1994); The Articulation of Differences or Maximón Syndrome (Guatemala: FLACSO, 1999, Consucultura, 2002, 2008); and Intercultural Brief History of Guatemala (Guatemala: Editorial Cultura, 2014). He is the editor of the critical edition of Miguel Angel Asturias' Tales and Legends (Paris: Archives, 2000), and of Stoll-Menchú: the Invention of Memory (Guatemala: Consucultura, 2001). He has also published novels including, Wild Demons (1977, 1993, 2015); The Splendor of the Pyramid (1986, 1993) and Face of the Earth, Heart of the Sky (trans. Edward W. Hood, Arizona: Bilingual Review Press, 2000) among others. He is a columnist in the Spanish daily La Insignia, the Mexican website México.com and the Guatemalan newspaper El Periódico. Morales holds a PhD in Latin American Literature and Culture from the University of Pittsburgh, and until 2010 he taught Latin American Literature in the International Graduate Program of the Department of Modern Languages ​​of the University of Northern Iowa. Morales was awarded the National Literature Prize Miguel Angel Asturias of Guatemala in 2007. He is a member of the Guatemalan Academy of Language (local chapter of the Royal Spanish Academy). Currently he is the Director of the Center for Latin American Studies at the School of Political Science of the University of San Carlos de Guatemala.

Martín Fernández-Ordóñez (Guatemala, 1976) holds a BA in Art History from Francisco Marroquin University, Guatemala and studied at the Accademia di Belle Arti di Urbino, Italy and the Free University of Berlin. He holds a Masters Degree in Museum Studies from Istituto per l'Arte e il Restauro Palazzo Spinelli, Florence, Italy with a graduate internship at the Thyssen-Bornemisza Museum in Madrid, 2005. In 2000 he was responsible for the Guatemalan Stand at the Universal Exposition in Hannover, Germany, and worked as Second Secretary for Consular and Cultural Affairs at the Embassy of Guatemala in Germany until 2004. He has participated in several internships such as one held at the Cultural Section of the UNESCO New York Office in 2008 and in education projects in Mexico, United States, China and Belgium. Visitor Professor of Art History at Francisco Marroquin University since 2006, he worked as Art History Coordinator, Department of Education of that same institution from 2011 – 2016. Currently he works as Executive Director for the art auction JUANNIO and as an independent consultant for art/museum/preventive conservation/education projects.

Tickets may be purchased here through our professional event ticketing system.

The symposium is part of the Pacific Standard Time LA/LA Santa Barbara Weekend. Additional information on events and exhibitions can be found at sbma.net/pstsb.

Your ticket for the: Symposium – Art from Guatemala: 1960 – Present