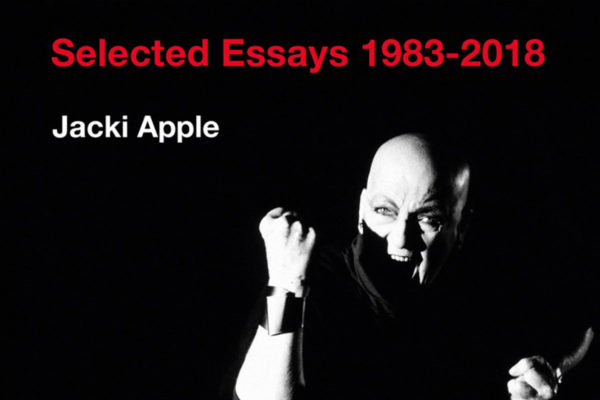 Experience interdisciplinary performance from the 1980s to 2018 through the eyes of one of its most compelling witnesses. Jacki Apple’s Performance | Media | Art | Culture traces performance art, multimedia theatre, audio arts, and dance in the United States from 1983 to the present. Showcasing thirty-five years of Apple’s critical essays, the collection is a rich compendium of sharp-eyed and eloquent observations on the rise and diversification of interdisciplinary performance, how new technologies influence American culture and contemporary life, the interdependence of pop and performance culture, and the politics of art and the performance of politics. Brimming with big ideas grounded in concentrated reviews of individual performances, this volume offers current and future readers a rich portrait of performance culture at the end of the millennium.

Books will be for sale by the artist. Cash or check only.

Jacki Apple is an interdisciplinary visual, performance, and media artist, writer, critic, and curator. Her critical writings include several hundred essays and reviews on performance, media arts, dance, music, and cultural politics that have been featured in numerous arts publications. From 1983 to 1995 she was a contributing editor and media arts editor at High Performance magazine and currently she is the author of the online column Peripheral Visions: Perspectives On Culture, Media, and Performance. Apple is Professor Emerita, Art Center College of Design, Pasadena, CA and the 2012 recipient of the College Art Association Distinguished Teaching Art Award.

Marina LaPalma is a poet, editor, artist, and art critic living in Santa Fe, NM. She edited The Plenitude: Creativity, Innovation and Making Stuff (MIT Press, 2007), Rich Gold’s final book on the interplay of art, science, design, and engineering in the making of our world. She hosts Other Voices Other Sounds on KUNM radio, reviews books for Santa Fe Radio Café, and writes for THE Magazine, a New Mexico arts monthly. Her album, IXNA: Songs from 1980, by Marina La Palma & Jay Cloidt was issued on vinyl in November 2018 by Concentric Circles.

Your ticket for: Performative Reading and Book Signing, Jacki Apple