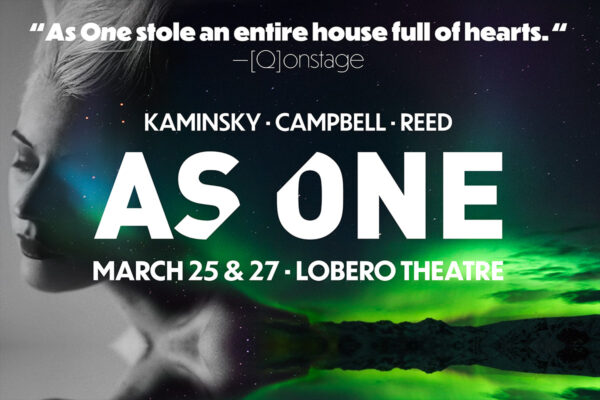 Join us for a discussion with Laura Kaminsky, composer, & Mark Campbell, co-librettist, of As One, the most performed contemporary opera in America today. As One makes its Santa Barbara debut at the Lobero Theatre on March 25 & 27. This event is FREE, however, registration is required. Please click here to register now!

This event has been conceived of and is sponsored by, Opera Santa Barbara. Doors open at 4:30 pm to allow guests to view MCASB’s current exhibition This Basic Asymmetry. The panel discussion begins at 5:00 pm.

Possessing “an ear for the new and interesting” (The New York Times), Laura Kaminsky frequently addresses critical social and political issues in her work with a distinct musical language that is “full of fire as well as ice, contrasting dissonance and violence with tonal beauty and meditative reflection. It is strong stuff.” (American Record Guide). Her first opera, As One, (2014; co-librettists Mark Campbell and Kimberly Reed) is among the most produced contemporary operas since its 2014 premiere with 50+ productions to date in the U.S., Europe, Canada, South America and Australia. The As One team has since been commissioned twice—by Houston Grand Opera for Some Light Emerges (2017) and Opera Parallèle/American Opera Projects for Today It Rains (2019). Hometown to the World (libretto: Reed; Santa Fe Opera) premiered in 2021, Finding Wright in 2022 (libretto: Andrea Fellows Fineberg; Dayton Opera). She is co-librettist (with novelist Lisa Moore) and composer for February, commissioned by Newfoundland’s Opera on the Avalon for 2023. Awarded the 2016 Polish Gold Cross of Merit (Zloty Krzyż Zasługi RP) by the President of Poland for exemplary public service or humanitarian work, Kaminsky has been recognized by the National Endowment for the Arts, Koussevitzky Music Foundation, Opera America, Chamber Music America, USArtists International, CEC ArtsLink International Partnerships, Likhachev-Russkiy Mir Foundation Cultural Fellowship, and has received six ASCAP-Chamber Music America Awards for Adventuresome Programming. Head of composition at Purchase College Conservatory of Music, and a composer mentor for the Juilliard School Blueprint Fellowship program, she leads The American Opera Project’s Artistic Advisory Council and sits on the boards of Opera America and the Hermitage Artist Retreat. Her music is recorded on the Affeto, Albany, Bridge, BSS, Cedille, CRI, Capstone, Mode, MSR, and Navona labels and is published by Bill Holab Music. Kaminsky is a BMI composer.

The work of Pulitzer Prize and Grammy Award-winning librettist/lyricist Mark Campbell is at the forefront of the contemporary opera scene in this country. Mark has written 40 opera librettos, lyrics for 7 musicals and text for 6 song cycles and 4 oratorios. His works include Silent Night, The (R)evolution of Steve Jobs, The Shining, Elizabeth Cree, Sanctuary Road, Stonewall, The Nefarious, Immoral but Highly Profitable Enterprise of Mr. Burke & Mr. Hare, Dinner At Eight, Rappahannock County, Later the Same Evening, Volpone, Bastianello/Lucrezia, and Songs from an Unmade Bed. In 2020, he also created and funded the first award for opera librettists in the history of the art form: the annual Campbell Opera Librettist Prize, administered by OPERA America. With his fellow As One collaborators, he also recently helped create the True Voice Award to help fund the training of transgender opera singers, administered by Washington National Opera. Premieres in 2022 include: A Sweet Silent in Cremona for Teatro Comunale Ponchielli, Unruly Sun for Orchestre Classique de Montréal, Edward Tulane for Minnesota Opera, A Year to the Day for The Violin Channel, A Thousand Acres for Des Moines Metro Opera, and A Nation of Others for the Oratorio Society of New York.

A chamber opera for two voices and String Quartet

With music & concept by Laura Kaminsky, libretto by Mark Campbell and Kimberly Reed, and film by Kimberly Reed, As One is a chamber opera in which two voices—Hannah after and Hannah before—share the part of a sole transgender protagonist. Fifteen songs comprise the three-part narrative; with empathy and humor, they trace Hannah’s experiences from her youth in a small town to her college years—and finally traveling alone to a different country, where she realizes some truths about herself.

Commissioned by the American Opera Project, As One opened on September 4, 2014, at the Brooklyn Academy of Music’s Fisher Space. Since its premiere, it has become the most produced new opera in North America, according to Opera America magazine.

As One is generously sponsored by the Zegar Family Fund, Dana White, Nicholas and Jessie Burlett, Bella Domani, the Mosher Foundation and the Towbes Fund for the Performing Arts.

By Arrangement with Bill Holab Music. As One was commissioned and developed by American Opera Projects (AOP)

All patrons must provide proof of vaccination against COVID-19 or negative test within the last 72 hours accompanied by picture ID. In accordance with the latest State and County guidance, patrons will NOT be required to wear a face covering. Detailed health protocols can be found on the Lobero Lobero website

Reserved tickets can be purchased online at lobero.org, and are currently priced at $149 and $99. A limited number of You Decide! Tickets (pay-what-you-choose) are also available by phone only through the Lobero Box Office, at (805) 963.0761, thanks to a generous grant from the Holly and Walter Thompson Foundation, Bank of America, N.A. Co-trustee.

Click the link below to register for this event