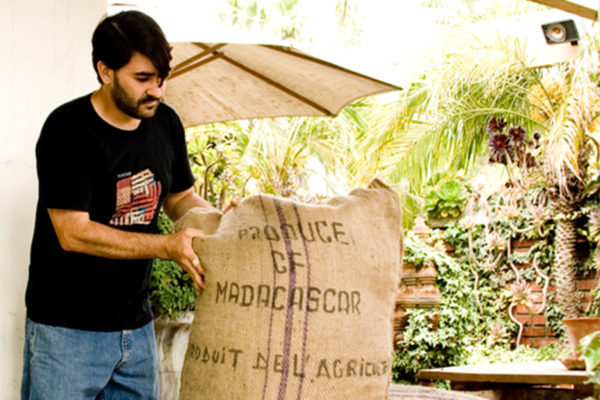 Reflect upon Bloom Projects: Brian Rochefort, Absorption by the Sun in its final hours over a glass of wine. Enjoy refreshments on the terrace before an exclusive walkthrough of the exhibition with Alexandra Terry, Associate Curator, MCASB, and special guest Mike Orlando, Founder of Twenty Four Blackbirds.

Admission includes one glass of wine. Members may verify attendance in advance by emailing hello@mcasantabarbara.org. Non-members may RSVP here to reserve their spot.

About Mike Orlando:
"As a young child, I was always interested in science and nature, and in general trying to figure out how things worked or how things were made. As I got older I realized I enjoyed the creative aspects of art as much as I enjoyed the analytical aspects of science. My career history led me from being a marine biologist SCUBA diving to collect data for researchers, to an analytical chemist analyzing unknowns, while my hobbies had me reading philosophy and playing percussion in a band.

After over 10 years of being a career scientist, I was lacking in creative outlets, so I started taking on new hobbies in my spare time--coffee roasting, restoring antique espresso machines, making cheese, baking, and eventually, during the process of building my own coffee roaster, I found chocolate making. I was hooked. The more I got into the chocolate making hobby, the more distant my interest in unknown samples became. About a year later quit my job and with the little money in my savings became one of the only bean to bar chocolate makers in the country.

What started in my kitchen with a pound of cocoa beans, a juicer, and a toaster oven, has now turned into a small-scale artisan chocolate company, complete with a factory stocked with obscure, and in most cases, home-built or modified equipment, serving over 400 retail customers nationwide."

Admission to this event is Free. Please click here to register.

You will be taken to Nighout to register for this event.