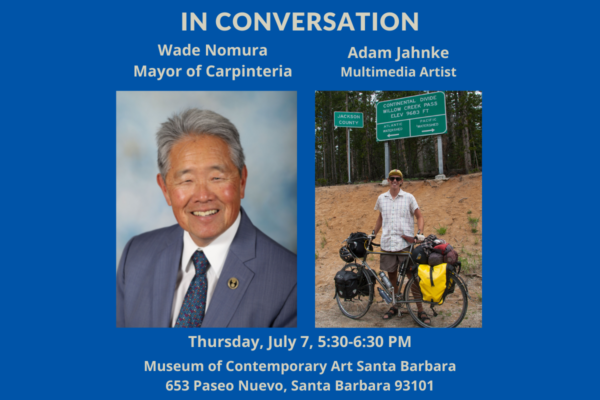 MCASB is delighted to invite you to a conversation between Wade Nomura, Mayor of Carpenteria, and Adam Jahnke, Multimedia Artist. As part of Adam Jahnke’s contribution to the Community Classroom, this conversation will explore Mr. Nomura’s history and contribution to our region, the founding of Nomura Racing, and Santa Barbara’s cycling history.

Established in Santa Barbara in 1979, Nomura Racing was a bicycle shop and BMX racing team that pioneered a data and material-driven approach to bicycle frame fabrication. This perspective about the bicycle and bicycle racing by Wade Nomura quickly garnered attention for both the cost attached to a Nomura frame and also through the numerous titles won by Nomura Racing.

In the mid 80’s Wade discontinued making bicycle frames after suffering an injury racing. Since ceasing production, Wade Nomura’s impact on the evolution of the mountain bike in California and cycling culture in the United States is unavoidable. As a result of Wade’s creations, his bicycle frames have since become doggedly sought after by collectors all over the world.

The success of Nomura Racing is deeply rooted in Wade’s creative spirit and passion to foster a shared experience between people. Whether exemplified through his landscaping business or work with the Rotary Club, Wade finds joy in community building and community service.

This event is FREE, however, due to limited space, reservations are required. Click here to reserve your space now!

International speaker and workshop leader Wade Nomura draws on his extraordinary experience as a global humanitarian, community leader, successful businessman, and champion athlete, to educate and inspire audiences around the world. In the last 10 years, Wade has presented to over 200,000 people across 15 countries, illuminating on how to maximize success, create impactful projects, and enhance team performance, through presentations ranging from conference keynotes to hands on workshops.

Wade is a well-known strategic thinker and innovator, expert in project creation and management. Within worldwide service organization Rotary International, he has conceptualized, assisted and reviewed over 200 charitable projects across the globe. Projects range from the development of a $1 million interpretive children’s play area based around local Native American history in Carpinteria, California, to an ambulance project in Southern Chile, to largescale water project in Michoacan Mexico bringing water to 250,000 people.

He currently serves as one of only 24 Rotary Cadre Technical Coordinators worldwide, requiring oversight of major projects in water, sanitation, and community and economic development, undertaken through The Rotary Foundation, which invests 250 million into humanitarian efforts every year. Wade has also served as the Rotary International President’s Representative the past seven years in Texas, Michigan, Virginia, Florida, Maryland, Alabama and Mexico. In 2018, Wade was invited to represent Rotary International President Ian Riseley at Morelia Mexico’s Conference, with Wade presenting in Spanish to over 400 attendees.

In his younger years, Wade was a national BMX Champion and professional racer. He has been inducted into the Japanese American Hall of Fame for his creation and racing of the Nomura Racing BMX bike, on which he won multiple national championships. Click here to read more >>>

Adam Jahnke is a multimedia artist who lives and works in Santa Barbara, California. Originally from San Diego, California, Adam relocated to Santa Barbara shortly after the completion of a Bachelor of Arts degree in 2011 from California State University Channel Islands. Adam’s move to Santa Barbara was prompted by his involvement with South Coast art and transportation organizations. As a result, Adam’s work explores cultural narratives about Southern California’s culture, geography, transit, and labor. Adam furthers this research through his professional capacity as both the Coordinator of a not-for-profit bicycle shop on UCSB’s campus and Lecturer within UCSB’s Art Department where he and students explore Applied Geography – an art practice that seeks to research and respond to the cultural and spiritual implications of both natural and man-made landscapes in Southern California.

Click the link below to register for this event

Your ticket for: In Conversation | Wade Nomura & Adam Jahnke