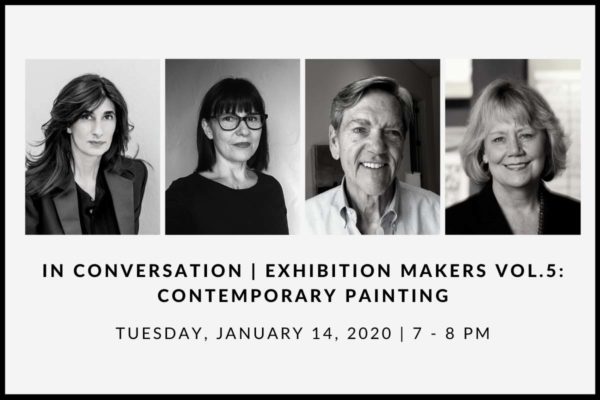 How do artists, art collectors, curators, and audiences relate to painting today? Bob Marshall, Art Collector, Maria Rendón, Artist, and Judy Larson, Director, Westmont Ridley-Tree Museum of Art, share insight into the work that goes on behind the scenes of exhibitions in this conversation moderated by Abaseh Mirvali, Chief Curator, Executive Director & CEO, MCASB, that explores the role of painting in the contemporary art world.

Judy Larson is the first holder of the R. Anthony Askew Chair in Art at Westmont College, where she directs the Westmont Ridley-Tree Museum of Art and teaches art history. Larson brings over thirty years of museum experience, most recently as the director of the National Museum of Women in the Arts in Washington, D.C. Previously she served as the director of the Taubman Museum of Art in Roanoke, Virginia and as curator of American art at the High Museum of Art in Atlanta, Georgia. She has taught art history at California State University, Dominguez Hills, Assumption College in Worcester, and at Emory University in Atlanta. She has lectured and published widely in her areas of scholarship, which include museum studies, women's studies, and American and contemporary art.

Bob Marshall is an active collector of 19th-century American paintings. He and his wife Siri also collect Japanese bamboo baskets, Japanese woodblock prints (shin-hanga), and 19th-century British painting. Before moving to Santa Barbara Bob was an attorney for TIME Magazine in New York and a Docent at the Minneapolis Institute of Arts.

Maria Rendón was born and raised in Mexico City where she received a BFA from Universidad Anáhuac. She received her second BFA from Art Center College of Design in Pasadena, California and completed her MFA at the University of California Santa Barbara in 2014. Exhibitions include: SUR Biennial “Espacio Entre / Entre Espacio”, Rio Hondo College; “Two by Two”, PØST, Los Angeles; “Shift, Stretch, Expand: Everyday Transformations”, Museum of Contemporary Art Santa Barbara; “Missing Rib”, Atkinson Gallery, SBCC; “Alter”, Art Design and Architecture Museum, UCSB; “Rock Paper Candy”, Gallery 1328 UCSB; “GLAMFA”, California State Long Beach; “Unholy Mess”, Santa Barbara Museum of Art, “Just Between Us”, Sullivan Goss - An American Gallery, “Figure Fragments”, Channing Peake Gallery.
Maria Rendón’s paintings and installations explore themes of transformation, hybridity, ritualistic experience and landscape. Infused with elements of control and chance, her paintings are inspired by the space between reality and perception, the present and the absent, the normal and the abnormal.
Her work is featured in New American Paintings #123, Graphis #355 and Taschen’s book, “Illustration Now!”. She lectures nationwide and in Mexico, has received awards from professional associations, as well as corporate commissions from the Audubon Society, NPR, and The Washington Post, among others.
Maria currently lives and works in Santa Barbara and Los Angeles, California.

Admission to this event is FREE. Please click here to register.

Your ticket for: In Conversation | Exhibition Makers Vol. 5