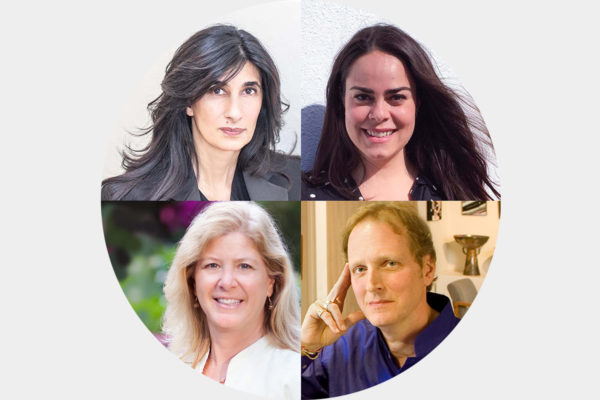 Have you ever wondered what it takes to make an exhibition? Alexandra Terry, Associate Curator and curator of the exhibition Bloom Projects: Brian Rochefort, Absorption by the Sun; Gwen Stauffer, Chief Executive Officer, Lotusland; Kevin Wallace, Director, Beatrice Wood Center for the Arts, Ojai; and Abaseh Mirvali, Executive Director, Chief Curator, & CEO, MCASB, share insight into the work that goes on behind the scenes of exhibitions in this panel presentation.

Bios of panelists:
Gwen Stauffer, M.S., Chief Executive Officer at Ganna Walska Lotusland, joined Lotusland in 2008. Under Gwen’s leadership, Lotusland has completed a significant number of major renovations including most recently the Japanese Garden. In the last ten years Lotusland has achieved remarkable international notoriety and expanded its public programs to become an important resource for Santa Barbara County. In addition to managing the gardens, Gwen has developed a unique periodic programming philosophy that combines garden themed art installations that reflect important environmental themes – Swarm: A Collaboration with Bees in 2013 and Flock: Birds on the Brink in 2015. These garden inspired art installations further ingrain Lotusland in the community and widen the discussion of a public garden’s role in society. Prior to Lotusland, Gwen served as the head of numerous other organizations including CEO of New England Flower Society in Framingham, MA; CEO of Callaway Gardens in Pine Mountain, Georgia; and Deputy Director of Hillwood Museum and Gardens in Washington, DC where she led the total restoration and interpretation of the historic gardens and greenhouse from 1993 until 2001. Gwen received her M.S. in Public Horticulture Leadership and Administration with a minor in Museum Studies and Environmental Sciences from the University of Delaware, and her B.S. in Ornamental Horticulture/Landscape Design from Delaware Valley College of Science and Agriculture in 1982.

Kevin Wallace, Director of Beatrice Wood Center for the Arts in Ojai, California, is an arts advocate, educator, author, and curator. His most recent book Intersection: Art & Life shares the value of the arts in modern society by placing contemporary art within the context of the history of humanity. Wallace contributes regularly to international publications and guest-curates exhibitions for museums. Previous books include Shadow of The Turning, Celebrating Nature: Craft Traditions/Contemporary Expressions; Transforming Vision: The Wood Sculpture of William Hunter, 1970-2005; River of Destiny: The Life and Work of Binh Pho; Moulthrop: A Legacy in Wood; Every Exit is an Entry: The Life and Work of Liam O’Gallagher, The Cutting Edge: Contemporary Wood Art & The Lipton Collection and Shadow of The Turning. Wallace has also co-authored a number of books, including New Masters of Woodturning: Expanding the Boundaries of Wood Art; The Art of Vivika and Otto Heino; Michael Peterson: Evolution/Revolution; Contemporary Turned Wood: New Perspectives in a Rich Tradition; Baskets: Tradition & Beyond; and Contemporary Glass: Color, Light & Form.

Alexandra Terry is the Associate Curator at the Museum of Contemporary Art Santa Barbara (MCASB), where she is responsible for planning, organizing and implementing exhibitions. From 2008 to 2015 she was curator at the MOP Foundation, a London-based non-profit organization dedicated to promoting and supporting Iranian contemporary art on a broad platform outside of Iran. At the MOP Foundation she curated annual exhibitions in the UK and UAE, managed yearly residency and scholarship programs for emerging artists, organized an ongoing series of panel discussions and lectures, and nurtured emerging artists selected from the MOP Contemporary Art Prize. As an independent curator with a focus on emerging artists, Terry curated exhibitions in the US and the UK, in addition to contributing to contemporary art publications. In 2009 Terry co-founded P.A.S.T. Projects, an art library and archive housed in The Woodmill artists’ studio and exhibition space in Bermondsey, London. From 2010-2014 she was an active member of the GANDT artists’ collective, which used art writing as a starting point for a variety of curatorial, publishing, and performative projects. Terry holds a BA from the University of Colorado, Boulder, CO and a MFA in Curating from Goldsmiths, University of London, London, UK.

Your ticket for: In Conversation | Exhibition Makers Vol. 3