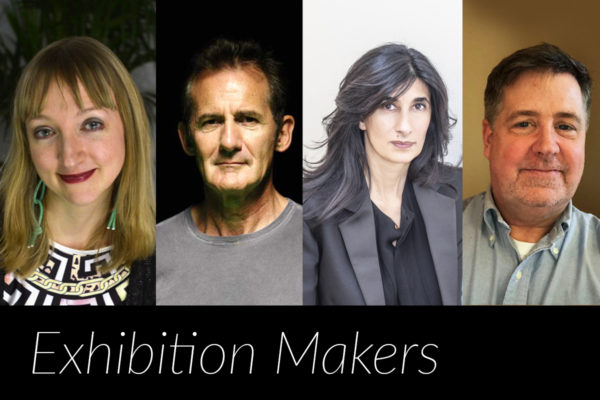 Have you ever wondered what it takes to make an exhibition? Performance artist Shana Moulton, Assistant Professor (Video, Performance, Installation), UCSB; Dick Hebdige, Professor of Art and Media Studies, UCSB; Charles Wylie, Curator of Photography and New Media, Santa Barbara Museum of Art; and Abaseh Mirvali, Executive Director, Chief Curator, & CEO of MCASB share insight into the work that goes on behind the scenes of exhibitions in this panel presentation.

Dick Hebdige
A cultural critic and theorist, Hebdige has published widely on youth subculture, contemporary music, art and design, and consumer and media culture. His books include: Subculture: The Meaning of Style (Methuen, 1979); Cut ‘n’ Mix: Culture, Identity and Caribbean Music (Methuen, 1987); and Hiding in the Light: On Images and Things (Routledge, Methuen, 1988). His current interests include the integration of autobiography and mixed media in critical writing and pedagogy.

Abaseh Mirvali
Abaseh Mirvali is the Executive Director, Chief Curator, and CEO at the Museum of Contemporary Art Santa Barbara. Previously she worked as an internationally-recognized independent contemporary art and architecture curator and project producer with a career-long commitment to civic engagement and public service through innovative collaborations between contemporary art initiatives and the community at large. Mirvali is the author of the concept and program development of the 2013 edition of The Biennial of the Americas, where she served as CEO, Executive Director and Comisaria from 2011 to 2013. She was the Chief Curator of Draft Urbanism, an innovative and groundbreaking exhibition of urban architectural interventions. Between 2005 and 2009, Mirvali was the Executive Director of the Colección/Fundación Jumex Arte Contemporáneo, where she consolidated and developed one of the most distinguished collections of contemporary art for a private institution in Latin America.

Shana Moulton
With a savvy fusion of humor and poignancy, Shana Moulton’s multidisciplinary work in video and performance explores contemporary anxieties though her filmic alter ego, Cynthia. Moulton’s cosmology of symbols, everyday objects, and altered states coalesce to form an alchemical snapshot of ambivalent self-awareness in trying times. Moulton has been broadly exhibited nationally and internationally including solo shows at the Palais De Tokyo, Paris; Yerba Buena Center for the Arts, San Francisco; and Art in General, New York. Group exhibitions include Migros Museum Für Gegenwartskunst, Zurich; Salzburger Kunstverein, Salzburg; Museu Nacional de Arte Contemporânea do Chiado, Lisbon; Oakland Museum of California, Oakland; Göteborgs Konsthall, Göteborg; Institute of Contemporary Art, Philadelphia; and Wiels Center for Contemporary Art, Brussels. She has performed at The Museum of Modern Art, New York; The Andy Warhol Museum, Pittsburgh; The San Francisco Museum of Modern Art, San Francisco; The Getty, Los Angeles; and Cricoteka, Kraków among many others. Her work is distributed by Electronic Arts Intermix and she is a featured artist on Art21’s New York Close Up.

Charles Wylie
Charles Wylie joined the Santa Barbara Museum of Art as Curator of Photography and New Media in June 2016. Recent SBMA exhibitions include A Brilliant Spectrum: Recent Gifts of Color Photography; Profound and Discrete Poetry: Photographs by Manuel Álvarez Bravo; and Nam June Paik: TV Clock. Wylie received his B.A. in American Studies from the University of Notre Dame and his M.A. in the History of Art from Williams College. Among his positions, he was as a graduate intern and research assistant in the J. Paul Getty Museum’s Department of Photographs and Assistant Curator of Contemporary Art at The Saint Louis Art Museum. Before moving to Santa Barbara, Wylie was The Lupe Murchison Curator of Contemporary Art at the Dallas Museum of Art from 1996 to 2011, and from 2011 to 2016 an independent curator, writer and consultant based in Dallas.

Your ticket for: In Conversation | Exhibition Makers Vol. 2