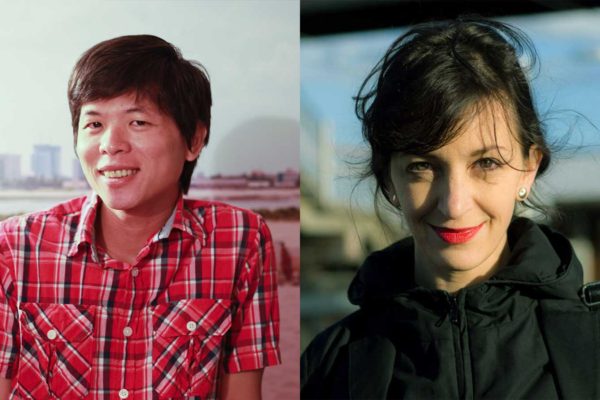 Please join us for a presentation by internationally-acclaimed Cambodian artist Khvay Samnang and Erin Gleeson, curator and scholar of contemporary art from Cambodia. The artist and curator will discuss the exhibition Bloom Projects Exchange Series: Khvay Samnang, Footprints of Yantra Man, currently on view at Museum of Contemporary Art Santa Barbara (MCASB) in the context of the artist’s practice in which he addresses controversial public issues in Cambodia’s history through poetic and performative interventions in drawing, photography, video, sculpture, and installation.

Khvay Samnang is a founding member of arts collective Stiev Selapak (Art Rebels), which formed in 2007 as a space for artists to share resources and exchange critical dialogue on contemporary art. The collective was intent to generate visibility and document various ways artists were making work that often dealt with the traumatic residue of the Khmer Rouge regime and the country’s subsequent rebuilding. Stiev Selapak’s work, including their founding in 2010 of the art space Sa Sa Bassac, together with curator Erin Gleeson, is seminal to the development of Cambodian contemporary art history.

Erin Gleeson has written and given numerous talks on contemporary art and culture from Cambodia, including at ResArtis, Tokyo Wondersite, 6th Asia Pacific Triennial of Contemporary Art, Queensland Art Gallery, Brisbane, Australia; Asia Art Archive, Hong Kong; and the Center for Curatorial Studies, Bard College, USA. She is the Cambodian Desk Editor for Art Asia Pacific magazine and contributes to other publications. Since 2005, Gleeson has curated exhibitions including FIELDS, An Itinerant Inquiry Across Cambodia (with Vera Mey and Albert Samreth), Phnom Penh: Rescue Archaeology: Contemporary Art and Urban Change, ifa, Berlin and Stuttgart, and IN RESIDENCE, Season of Cambodia (with Leeza Ahmady). Originally from Minneapolis, Gleeson worked in public programs at the Walker Art Center and Minneapolis Institute of Arts before moving to Cambodia in 2002 on a Humphrey- Fulbright Fellowship awarded by the University of Minnesota Law School Human Rights Center. She is based between Phnom Penh and Berlin.

Your ticket for the: Artist Lecture with Khvay Samnang and Erin Gleeson