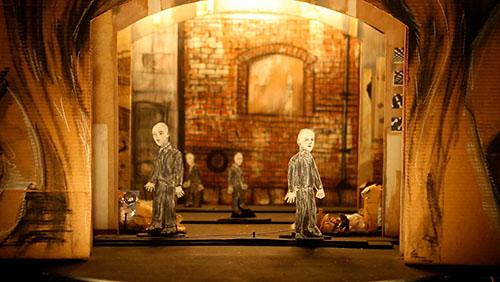 Described as “hybrid puppet theater,” Animal Cracker Conspiracy presents a tale about a lowly debt collector who undergoes a spiritual transformation while under the management of a tyrannical overseer. Using toy theater, table-top puppets, objects, and stop-motion animation and film, The Collector unfolds into a multi-dimensional performance reminiscent of the dystopian elements of George Orwell’s novels.

Forum Lounge is a series of free, performance-based events that reflect MCASB’s mission to advance creativity by presenting art in the form of exceptional music, dance, video, and other multi-media to our community. The series encourages experiences with unique performance pieces ranging from the theatrical to the avant-garde that are normally found only in large, metropolitan venues.

Your ticket for: Animal Cracker Conspiracy – The Collector