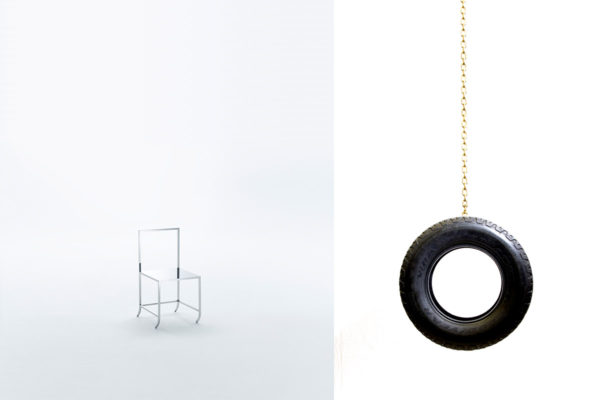 Free Play centers around the idea of play as an influential actor in the design process, producing work which intimately reveals our drive toward novelty, upending traditional notions about the role of design in our lives. Each creator shares an alternate view of the world through objects which appropriate childhood motifs, employ satire, and generate form through chance. This sense of freedom results in works that are wonderfully illogical, whimsical, and poignant.

“Free Play is a collection of objects and architecture which stand apart from the contemporary world’s increasing movement toward efficiency and automation. These works share daydreams, jokes and stories. They pursue pleasure,” says Cunningham Cameron. “We study material culture to better understand the trajectory of civilizations. Free Play suggests how looking at the products of play rather than necessity reveals more about how we got here and where we’re going.”

Cunningham Cameron has been immersed in the design world for more than a decade as a curator, advisor, and writer. In her role as Creative Director for Design Miami/, she worked alongside some of the most groundbreaking designers and architects from around the world, many of whom are included in Free Play.

The exhibition design, by Berlin-based Sam Chermayeff Office, is a labyrinth of personal moments and stories. The impressive lineup of creators included in the exhibition features names such as Maarten Baas, Design Miami’s 2009 Designer of the Year; Nendo, named Designer of the Year by Wallpaper Magazine, Elle Decor and Maison & Objet in 2015; LA-based Jimenez Lai, founder of Bureau Spectacular; and Snarkitecture, whose installation piece The Beach has been touring globally since 2015. Katie Stout, the 2015 winner of HGTV’s show Ellen’s Design Challenge and who was recently named to Forbes’ 30 Under 30 list, will also have work in the exhibition – a work commissioned specifically for Free Play.

As design culture achieves wider popularity around the world, Free Play introduces a design exhibition that aims to initiate a dialogue around that blurred question of what comprises art in today’s day and age.

Your ticket for the: Free Play