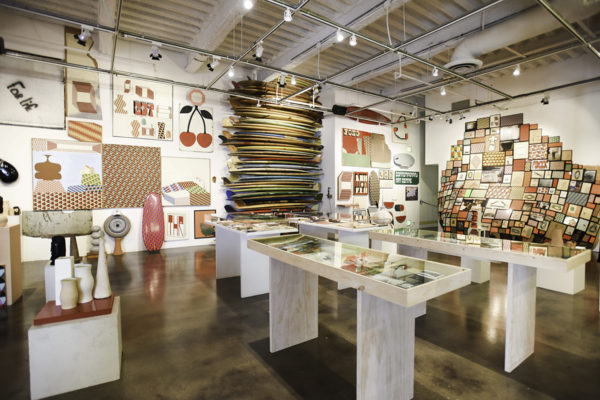 Museum of Contemporary Art Santa Barbara is pleased to present Barry McGee: SB Mid Summer Intensive, a solo exhibition featuring a sprawling installation of paintings, drawings, and sculptural objects by San Francisco, CA-based artist Barry McGee. McGee embraces improvisation as a guiding principle in his work, finding a balance between chaos and meticulous attention to detail. Constellations and groupings of drawings and sculptures are juxtaposed against found objects, ephemera, and collected works by other artists.

McGee’s multilayered imagery is born out of elements of the urban experience, including issues of identity, homelessness, and pointed critiques on consumerism and commercialism. Emblematic characters appear slumped and droopy-eyed, whose faces shift with wistful and sullen expressions. Framed drawings of these faces hang alongside candid photography and patterned graphics in an immense “boil” that bulges from the wall, creating a visual wave of energy that permeates throughout the Museum.

In this expansive exhibition, the old is interlaced with the new. Rather than highlighting individual works, McGee has produced an environment at Museum of Contemporary Art Santa Barbara that immerses visitors into decades’ worth of McGee’s practice. The resulting display is best characterized by its spontaneous, perpetual evolution.

It is in this realm that McGee also pays tribute to the Santa Barbara community. Elements of surfing history are threaded throughout the exhibition, including a gallery dedicated to surfing legend Reynolds Yater. Surfboards shaped by Yater are stacked floor to ceiling accompanied by photographs from the surfer’s personal archives. 2018 Surfers’ Hall of Fame inductee Herbie Fletcher and his wife Dibi Fletcher have also contributed works to the exhibition.

McGee’s attention to community extends to the “L. Fong Healing Arts Centre,” two rooms paying homage to local artists and McGee’s friends, who were invited to contribute to the space. Well-worn couches and vintage lamps become part of the landscape in what feels more like a crowded basement living room than a gallery. The flicker of stacked TVs play home video footage shot on McGee’s personal travels and surfing trips, in addition to films shot by professional surfers.

This exhibition was curated by Alexandra Terry.

Special thanks to exhibition sponsors RVCA and Scooters for Peace.

About the Artist
Born in 1966, Barry McGee is arguably the most well-known and influential of the recent surge of artists from the Bay Area to have international success. He was raised in San Francisco, studied painting and printmaking at the San Francisco Art Institute (graduating in 1991), and continues to live and work in the city. McGee’s boldly graphic, colorful work incorporates a multitude of influences (including, for example, graffiti, American folk art, and Op Art), but is most immediately evocative of the urban street culture from which he hails. Engaging the ways in which the city’s unique vernacular translates into artistic imagery, McGee celebrates the diversity, distinctive characters (one of his well-known motifs is a crawling, sad-sack bum), and neighborhood communities of the inner-city. His work critiques consumerist culture and the constant backdrop of commercialism in everyday interactions; rejecting the billboard and chain store, McGee instead finds inspiration in the seeming randomness of graffiti, the endless uploading of images on the internet, and the creative styling of misfits. McGee’s work succeeds in its sensitive balance between anarchy and collaboration, resulting in environments which immerse the viewer in his singular, yet inclusive, vision.

His work has been the subject of exhibitions at the Berkeley Art Museum, Berkeley, California; the Modern Art Museum Fort Worth, Fort Worth, Texas; Hammer Museum, Los Angeles; the Prada Foundation, Milan; the Walker Art Center, Minneapolis; the Butler Gallery, Kilkenny Castle, Ireland; and The Watari Museum of Contemporary Art, Tokyo, among others.