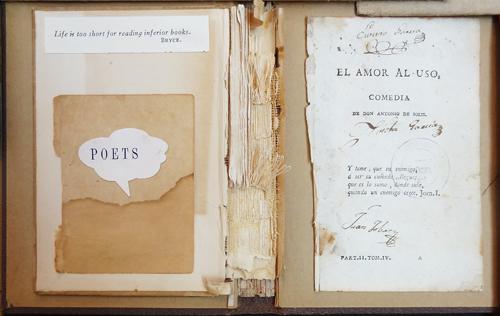 “I have always imagined that Paradise will be a kind of library.”  Jorge Luis Borges

Throughout the ages, humanity has created, destroyed, rescued, neglected, discovered, stolen, and cherished libraries. History offers the library as a praxis that illuminates the human condition—indexing knowledge formation in different societies. In the exhibition Requiem for the Bibliophile, seven artists consider the current state of this ancient establishment to provide a diverse set of perspectives on its next manifestation, acknowledging the library of the 21st century as anything but stable.

Because libraries stand in parallel to art museums as vessels of civilization’s reminiscences, visual art maintains an ineluctable connection to the written and spoken word secured in libraries. As the artists in Requiem for the Bibliophile examine the library’s role as a vital part of society, they interpret how this institution continues to influence the art of our time. Historical and current phenomena that affect the library system will be examined vis à vis artistic production of Jorge Méndez Blake, Carlos Garaicoa, Nancy Gifford, David Horvitz, Emily Jacir, Xaviera Simmons and Mickey Smith. In newly commissioned and recent works ranging from architectural proposals to large scale installations, they explore the library via concepts of diversity, strategic redundancy, innovation, and experimentation.

Register for Exhibition: Requiem for the Bibliophile

Your ticket for: Requiem for the Bibliophile