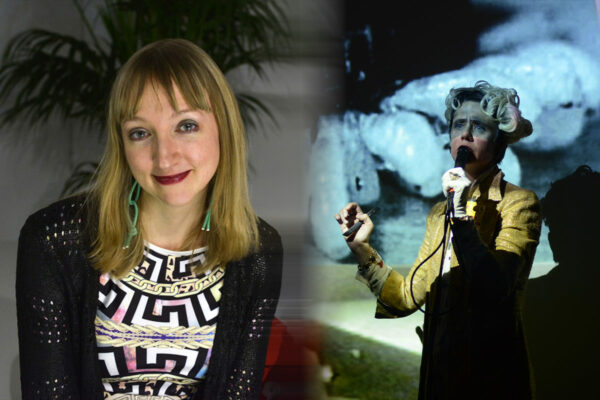 MCASB Members are invited to join us in person for special performances by artists Shana Moulton and Irene Moon. Doors open at 5 pm, with performances taking place from 5:15 - 5:45 pm. If you would like to become an MCASB Member and gain access to this special event, click here.

Both performances will also be broadcast on INSTAGRAM LIVE @mcasantabarbara starting at 5:15 pm.

All are invited to join us following the performances to celebrate the closing of Shana Moulton: The Invisible Seventh is the Mystic Column. Enjoy beer, wine, and tunes on the Upper Arts Terrace at Paseo Nuevo - just use the tiled stairs facing Chapala Street to find us.

Shana Moulton: The Invisible Seventh is the Mystic Column at Museum of Contemporary Art Santa Barbara (MCASB) is on view through to Sunday, August 1, 2021.

About the Artists
Shana Moulton (b. 1976, Oakhurst, California, USA) lives and works in Santa Barbara, California. Over the past 18 years she has been developing her ongoing video/performance series Whispering Pines, in which she plays the role of “Cynthia,” both a fictional figure and the artist’s alter ego. She has shown her work extensively both in the USA and internationally, including solo shows at the Palais De Tokyo in Paris, Yerba Buena Center for the Arts in San Francisco, Art in General in New York, the Zabludowicz Collection in London, the Museum of Fine Arts in St. Petersburg, and the Museum of Contemporary Art in Cleveland. She has performed at The Museum of Modern Art, The New Museum of Contemporary Art, The Kitchen in New York, The Andy Warhol Museum in Pittsburgh, The San Francisco Museum of Modern Art, and many others. Moulton earned her BA from University of California, Berkeley, in art and anthropology and her MFA from Carnegie Mellon University. She is an Assistant Professor of Art at University of California, Santa Barbara.

Since 1997, Scientifically Speaking with Irene Moon has been presenting The Lectography: musical lectures about insects and other arthropods in an attempt to elevate entomology as a rock genre. Performing at basement house shows and more famous music venues like the Knitting Factory, Cafe Oto, and the San Francisco Electronic Music Festival, Irene Moon has toured the US, Europe, and Australia. She created over 30 musical volumes during her career and performed live radio broadcasts dealing with entomological topics on WFMU in New York and other radio stations. Irene Moon (a.k.a Katja C. Seltmann, Ph.D.) is the Director of the Cheadle Center for Biodiversity and Ecological Restoration at the University of California, Santa Barbara. She brings the aesthetics from the entomology laboratory in front of alternative audiences in the form of absurd, factual presentations about insects. Her performance for the Museum of Contemporary Art Santa Barbara is a lounge-inspired lecture on moths titled “Lovely Moth” that incorporates psychedelic imagery, pop-styled torch songs, and comedy.

Your ticket for: Live Performances by Shana Moulton and Irene Moon