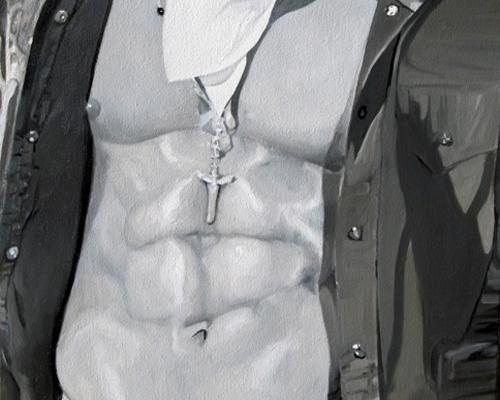 Join us for the opening reception of Bloom Projects: Conrad Ruiz, Knuckles and Bubbles on Saturday, January 24, 2015.

In his large-scale paintings and new explorations in sculpture, Conrad Ruiz (b. 1983, Monterey Park, CA) delves into the concept of machismo. For the past seven years his fantastical works, oscillating between figurative and abstract, have captured freeze-frame instances of stirring sporting events, amusement park thrills, and mass group exercises in attack strategies that often situate the male figure in actions that bolster his heroic status. Ruiz’s references to history painting converge with pop culture imagery—drawn from the entertainment industry of Los Angeles where he currently lives—and are interwoven with aspects of his personal experience growing up as a teenager in nearby Hacienda Heights. Says Ruiz in an interview with VICE magazine, “One thing I’m constantly thinking about when I’m making work is the ultimate boy-zone, like comic books, video games, fantasy, and sci-fi.” In so doing, his paintings are imbued with a familiar range of adolescent impulses bound up in ever-complicated politicized issues of sexual identity, body image, competitive drive, and willingness to conform.

The exhibition at MCASB will feature a selection of new and recent paintings from Ruiz’s Juice series— vibrant sprays and splashes of power drinks—along with a painting and sculpture from the artist’sAbscapes series. Charged with power and desire, the works, while challenging fraught stereotypes of masculinity, confront a highly mediated range of seductive forces that influence how identity becomes performed in contemporary culture.

Conrad Ruiz received his MFA from the California College of Arts in 2009. He has participated in numerous museum exhibitions in the U.S. and Mexico. Ruiz’s work is part of public and private collections that include the Berkeley Art Museum; ArtNow International, San Francisco; and the Peggy Cooper-Cafritz Collection, Washington D.C. He currently lives and works in Los Angeles, CA.